This month, we discuss Ayn Rand’s moral philosophy with Greg Salmieri, who teaches at Rutgers University and Stevens Institute of Technology and is co-secretary of the American Philosophical Association’s Ayn Rand Society. Click here to listen to our conversation. 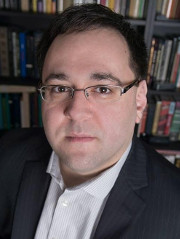 But wait: Ayn Rand is most famous for her novels The Fountainhead and Atlas Shrugged. Where does she fit into mainstream, professional philosophy? Does she fit in at all? Salmieri encourages us to consider Rand with the perspective we afford others who have proven pivotal in philosophy: say, Descartes and Locke. In their own day, Descartes and Locke both did much else besides philosophy; but their larger critiques involved philosophy, and were deepened all the more so because they did not restrict themselves to their day’s philosophy. Those critiques have gone on to shape philosophy profoundly, so much so that today we can take their once-unique approaches for granted – and so we can take their being philosophers for granted. Perhaps we do not yet appreciate the impact Ayn Rand can ultimately have on philosophy?

Regardless of her present or future recognition as a philosopher, Salmieri unearths for us a wealth of ideas from Rand’s work. Rand did above all strive to be a novelist, especially in the romantic tradition of Victor Hugo. But as a novelist, she wrote of epic moral conflicts motivated by people passionately committed to particular values – particular moral philosophies. This broached her probing of what makes a value at once right and objective, but not impersonal or imposed. And it related to her more explicitly controversial perspectives, exemplified not least in her book titled The Virtue of Selfishness.

Join us as Greg Salmieri helps us further make sense of this and other ideas in Ayn Rand’s moral philosophy.